Euskal Errati Telebista (EiTB), the Basque Radio Television addressed the issue of Biodiversity, in its Teknopolis program, one of its senior programs. Our colleague Ibon Cancio, from the Plentzia Maritime Station (PIE) of the University of the Basque Country (UPV / EHU) was interviewed while he presented some of the coastal areas where he usually samples, places rich in biodiversity. Many of the species present in those areas can be utilized as marine genetic resources by the industry as well as by researchers from academia, in order to obtain products with many potential uses: cosmetic, nutrition, health… Ibon Cancio focused his intervention on the importance of properly explaining what marine genetic resources are, what is their origin, who owns them and how necessary is to protect those resources, hence preserving biodiversity.

Dr. Cancio explained the regulations governing access to genetic resources, focusing on the the Nagoya Protocol on Access and Benefit Sharing. He explained how the Nagoya protocol aims at a fair sharing of the benefits obtained from the exploitation of these genetic resources between both the party that exploits them and the provider country.

You can enjoy the full program here 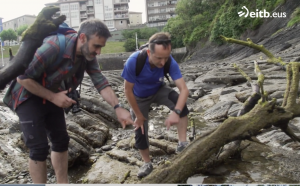