EBB partnership met virtually during three days, on 8th, 27th and 28th October, to take stock of the progress made in the last year and plan the next and final actions before the project finishes on 15th April.

They were intense sessions, where reporting on work packages was followed by short presentations by the partners.

Many new deliverables, finalised or closed to be in their final form were presented: amongst them, 1) an on-line EBB catalogue, a centralised gateway that will provide access to culture collections and biobanks held at EBB institutions; 2) the Handbook on implementation of EBB Best Practices; 3) a Step-by-Step guide on ABS compliance for commercial users, a report on the EBB Use Cases… the list goes on and the next months will be focused on the capitalization of all those outputs, making sure they are uptaken by other initiatives or projects.

During the General Assembly, the legacy of the project was also discussed, in particular, with regard to the European Marine Biological Resource Centre, EMBRC, under which EBB project is running. EMBRC will be the main depository of the main outputs. In particular, the Handbook on implementation of EBB Best Practices has already been endorsed by EMBRC, and in the future it will be submitted to be part of the EU Registry of Best Practices. The EBB online catalogue will eventually become an EMBRC catalogue for collections and biobanks from EMBRC members all over Europe. 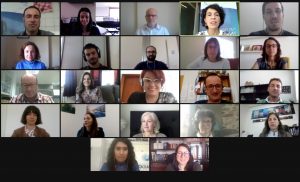 In addition to EBB partners directly contributing to the project, the General Assembly counted on a number of guests from reputed institutions such as SANGER Welcome and the Scottish Association of Marine Science. EMBRC was also represented by its executive director Nicolas Pade, and its ABS officer, Arnaud Laroquette.

You can find the agenda of the Assembly here.