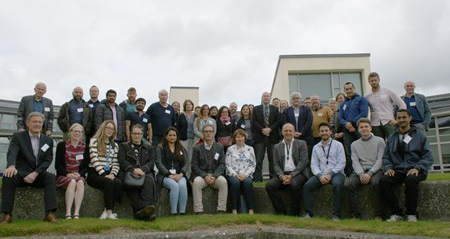 The Marine Institute hosted a one day workshop on Tuesday, September 4th that brought together Irish researchers broadly working in the field of marine biodiscovery in order to facilitate knowledge exchange, identify potential synergies and research links, and increase awareness of the national expertise, data and other resources. This with the view to maximise the potential of marine biodiscovery at a national level and to contribute at the same time to the development of this field of research in a European context.

The workshop was opened by Dr Peter Heffernan (Marine Institute, the State agency for the marine research in Ireland) and chaired by Dr Jeff Fisher (Marine Institute – morning session) and Prof. Olivier Thomas (NUI Galway – afternoon session). Both NUI Galway and the Marine Institute are in the forefront line to foster the marine biodiscovery in the country. Prof. Olivier Thomas also opened the scientific contributions to the workshop with an overview of the construction of a National Marine Biodiscovery Laboratory in Ireland, focusing in particular on the demonstration of its new database. Maria Vittoria Marra (NUI Galway) explained the importance of taxonomy in biodiscovery and in this context introduced the Irish participation to the EBB project. To do that, in the second part of her talk M. V. Marra presented first EMBRC and its mission and then the two EMBRC projects in which NUI Galway is involved, i.e. Assemble+ and EBB itself. Focusing on the latter, she also reported data from the EBB workshop in Brest (May 2018) on the level of awareness of the companies enquired about ABS and Nagoya protocol. The following speakers described some exciting contributions of the academic research in Ireland to marine biodiscovery focusing on the potential of macroalgae (Dr. Dagmar Stengel, NUI Galway), the  bioactive peptides of marine origin as functional foods (Prof. Dick Fitzgerald, U Limerick), the deep-sea genetic resources (Prof. Louise Allcock, NUI Galway) and the marine microorganisms (Prof. Alan Dobson, UC Cork). The industry point of view was introduced by David O’Neill with the experience of the Bantry Marine Research Station in county Cork. The workshop provided also the opportunity to benchmark the activities of the researchers  operating in Ireland through the invitation of European colleagues working in the development of marine biodiscovery, i.e. Prof. Jeanette H. Andersen (UIT Norway), Dr. Fernando Reyes (Fundacion Medina Spain) and Prof. Gudmundur O. Hreggvidsson (Matís Iceland).

The workshop was followed on the 5th fo September by a roundtable about two main topics: i) marine biodiscovery as contribution to the development of the Bioeconomy Center supported recently by the Irish government and the ii) plan of establishing a fit for purpose national biorepository for Ireland. Prof. Grace McCormack (NUI Galway) introduced to the discussion the EBB project highlighting its potential role in implementing the outcomes of the roundtable. The parties involved acknowledged the utility of the EBB actions for the accomplishments of the objects discussed and expressed an interest in being involved in the next steps of the project.