After more than three years of work, the project celebrated, this last Tuesday, March 23, its closing event: the “Symposium on Biobanking and Marine Diversity”. The event gathered around 100 people from all over the world interested in EBB results and main outcomes.

The Director of the Marine Research Center (CIM) of the University of Vigo, Daniel Rey, opened the symposium and showcased the importance of the European Blue Biobank project for the European marine stations and for the European Marine Biological Resource Centre (EMBRC) community. The CIM’s Director also complimented EBB partners for all the effort made during the project implementation, highlighting that this effort was recognized by the Atlantic Area Awards during the 5ª Atlantic Stakeholder Platform Conference, held in 2018.

Then, Jesús Souza Troncoso, EBB project’s leader at University of Vigo, gave special thanks to all the people involved in the project from its drafting to the present time.

The presentations sessions started with Fiz da Costa, project manager of EBB project, who focused on the legacy that the project leaves to the EMBRC community and to the entire marine science community. He showed, in a schematic way, the main results obtained in this project that will remain operational over time and will serve to improve the quality of marine stations, biobanks, culture collections and marine science researchers. His speech also served as an introduction of the main topics that were presented during the symposium.

The EMBRC Executive Director, Nicolas Pade, followed presenting EMBRC-ERIC and showing the main goals of this research infrastructure with special focus on the services provided. He also explained the important role of EMBRC (and its biological resources centers) in helping research to carry out their “due diligence” regarding Access and Benefit Sharing (ABS) legislation.

This last point served as a springboard for one of the project’s main achievements: the creation of a best practices manual to comply with the ABS by EBB project, that has been also endorsed by EMBRC. This manual, entitled “The EMBRC guide to ABS compliance. Recommendations to marine biological resources collections’ and users’ institutions”, was presented by Anne Emmanuelle Kervella and Heidi Tillin from CNRS-Station Biologique de Roscoff and Marine Biological Association, respectively. Anne-Emmanuelle made a presentation introducing the main aspects of ABS regulations and the Nagoya Protocol. Then, Heidi Tillin, presented the structure of the EMBRC guide and focused on one of the technical annexes.

After, Amber Scholz, from the DMSZ German Collection of Microorganisms and Cell Cultures, explained to the audience the advantages and drawbacks for DMSZ collection of registering in the European register of collections.

The last talk was given by Ian Probert, manager of the Roscoff Culture Collecion, who presented the management tools TRACK and TRACE. TRACK is a web-based database tool to manage data pertaining to marine biological resources provided from biobanks. TRACE, on the other hand, is a common online catalogue of marine biological resources available from EBB partners, which includes resources from culture collections, cultured macroorganisms, sample collections and wild-collected resources.

The event finished with Fiz  thanking all EBB members for their contribution during the years to the success of the project, the participants to the event for attending and the organization.

The recording of the event is now available on the UvigoTV channel. 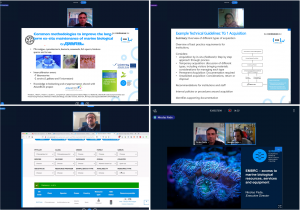